Alistair Andrews started flying at the age of 18, teaching himself on a ragged old paraglider that he bought from eBay. He was lucky to survive these first steps and eventually was taken on by a local school who converted his self taught skills into a BHPA Club Pilot rating; he hasn’t looked back!

During this self taught period, he and his friend Oli Fisher had a few near misses, bumps and plenty of exhilarating flights in South Wales. As they gained experience as both paraglider and military pilots, they realised that they could combine the confidence of their youth, with the safe, disciplined and challenging experiences they’d had during military flying training to develop their paragliding skills to a much higher level.

In 2009 they started Team eVol as a small group of pilots keen to progress in the various disciplines of paragliding – be it cross country, acro, or speed flying.

Fourteen years on and Alistair is now a BHPA Instructor, Advanced Pilot, Tandem Pilot, Guide, Coach and Experienced competition organiser. Oliver now works for British Airways and runs a fixed wing flying school and guided holidays in Florida. He sails in his spare time, but still paraglides and speed flies when time allows.

Having left the Royal Navy in Feb 2017, Alistair now uses his experience in cross country paragliding and instruction as well as his skills gained as a military Search and Rescue pilot to help you progress safely to the highest levels of cross country flying in this challenging, rewarding and addictive sport. 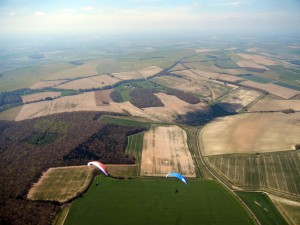